skip to main | skip to sidebar

OpenIndiana has finally been updated (to oi_151a8) and with it a few new features and of course many bug fixes. All this should also be true for OmniOS r151006 which has been out for a few month already (and probably SmartOS). Here are a few new features I noticed more than others while scanning the illumos commits since the last update.

More in depth information on the two larger enhancements to ZFS can be found here:
LZ4 Compression
L2ARC Compression
Posted by Henkis at 1:47 PM No comments:

It feels almost like fishworks analytics lite but without advanced features such as drill-down and heat maps. An example from a box running OpenIndiana: 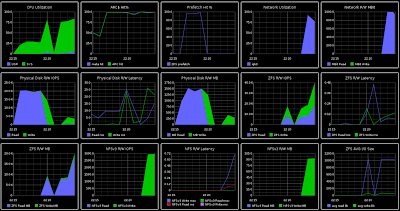 You get a good view of how the layers interact, the latency for reads in ZFS compared to reads in from the physical disks, average latency, maximum latency, average read size and see how much more data ZFS reads form prefetch including hit rate etc.

I based this on the iomon dtrace script with some glue to send it into graphite, I also added ARC statistics and CPU/Network statistics. ( There is a iomon-graphite effort available on the web but that did not give me correct statistics and did not include things like CPU and network utilization ).

Oracle have announced new systems based on the new T5 and M5 processors. The T5 has doubled the number of S3 cores from the T4 and increased the clock frequency to 3.6GHz.

All new systems both T5 and M5 supports LDOM (Oracle VM for SPARC).

Did everyone read that the M5-32 Supports 32TB of memory? No wounder they had to rewrite the virtual memory subsystem in Solaris 11.1

SPARC Servers
Posted by Henkis at 12:38 AM No comments:

The release notes for LDOM 3.0 confirms what we already knew, logical domains will be supported not only on upcoming SPARC T5 systems but also on the new generation for Fujitsu SPARC Server, M10.

The new SPARC M10 systems can now be seen on Fujitsus site (English translation).
From the Register:  Fujitsu launches 'Athena' Sparc64-X servers in Japan
Posted by Henkis at 2:02 AM No comments:

The last update of Solaris 10 has now been released, update 11. The final name of the release is Solaris 10 1/13 and not 8/12 as plans earlier indicated. This is probably due to the upcoming SPARC T5 systems, to have the releases close in time. Supports the latest and greatest X86 systems, SPARC M-series, SPARC T4/T5 while still working fine on my 15 year old Ultra 2.
Solaris 10 has full support for another five years and extended support until 2021.


I hope this release removes the restriction that prevented dynamic reconfiguration of resources after a live migration.
This release also seems to have been tested on upcoming SPARC processors: "7159011 M4/T5: Migration fails initialization on Logical Domains Manager startup" including Fujitsu Athena: "RFE: Cross CPU Migration support between Athena server and T series".

Henkis
I've been using Unix, mainly Solaris for over 15 years. While Solaris was open I tried to be part of the community with this blog and by filing bugs and debugging. During the days I work with standardization and implementation of the Unix platform at a large company. This involves design and implementation of Solaris and everything around it including security, performance, storage, virtualization and development. I also work as a consultant part time and can be contacted at henrik (at) gigamega.se. Twitter: @sun4v